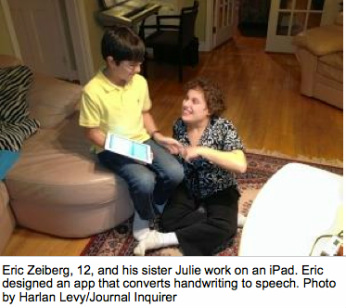 At a family gathering with friends in Rhode Island on Thanksgiving 2011, then-11-year-old Eric Zeiberg, a sixth- grader from West Hartford, began a quest.

One of the friends has muscular dystrophy and has trouble speaking. To compensate, she had been texting on an iPad, which converts the text to a voice. But there’s a problem, she said.

Eric Zeiberg, 12, and his sister Julie work on an iPad. Eric designed an app that converts handwriting to speech. Photo by Harlan Levy/Journal Inquirer

Eric decided to try to create such an app, hoping that it might also help his sister Julie, 23, who is autistic and has speech disabilities.

“She was my inspiration for the whole project,” Eric said. “She can’t communicate, and it’s really hard for her to get words out. This is a starting point for helping her.”

Thus began a process that ended on Dec. 2 with the debut of HandySpeech at Apple’s app store, the only handwriting-to-speech iPad — and iPad Mini — application to help people with autism, Lou Gehrig’s Disease, stroke, muscular dystrophy, and post-operation voice difficulties.

It’s easy to use — just use a finger or a stylus to write in the yellow section at the bottom of the iPad screen, then hit the speech button, and the writing turns into a male or female voice.

But HandySpeech wasn’t easy to produce.

“I started from scratch,” Eric said. “I didn’t know anything about the programming languages you use. I just had experience with computers. First I had to learn how to build the application — all the technologies and the Internet and how to code, and I used tutorials and websites to help me build it.”

Apple had to approve the application, which is far from automatic. For Eric, it took only about a week.

“The process of uploading the actual app to Apple’s app store was extremely difficult,” he said. Defining “difficult,” Eric said, “I had to spend a whole day learning how to do that one simple task, but once you get the hang of that it’s pretty easy.”

Easy for him, that is.

The 70 people who bought this versatile app so far — for $29.99 — can write and “speak” in 11 languages, including Dutch, French, German, Danish, Spanish, Swedish, Norwegian, Finnish, Italian, U.S. English, British English, and Portuguese as spoken in Brazil and as spoken in Portugal.

But Eric isn’t finished. He has a new version coming out in two to three weeks, with several new features, including:

• Phrases: you’ll be able to scroll down a list of phrases such as “Please wait while I am writing” or “How are you?” and click on any one, and a voice will say it.

• Speech speed control, so you can slow down or speed up the voice. • Ability to upload the app to an iPhone.

“I am very proud of him,” Eric’s father Boris said, “because he put his mind together, saw it through, and did something significant, but mostly because he shows that he cares about people.”