The Gift of Voice - The Hartford Courant Story 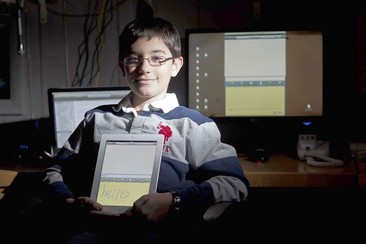 WEST HARTFORD — At Thanksgiving last year, Eric Zeiberg and his family were having dinner with family friends, one of whom suffers from muscular dystrophy, the 12-year-old recalls. That friend, a physician, has lost most of her speaking abilities and was writing on a notepad to carry on the dinner conversation. At work, she would do the same, and a nurse would read it to her patients.

Less than a year later, Eric had developed HandySpeech, an iPad application – the only one of its kind – that recites out loud what the user writes on the touchscreen using their finger or a stylus.
Growing up with a non-verbal older sister – 22-year-old Julie, who is autistic – has helped Eric understand how frustrating it can be for people who have difficulty speaking.

"Eric grew up with Julie … When he was born, Julie was 10," said their mother, Maya Zeiberg. "It's very interesting to see how they interact. Very quickly from a younger brother he became like an older brother, though he's 10 years younger."

Although Julie can't use the app because she doesn't have the ability to write, she inspired HandySpeech, he said.

"Julie gets very frustrated when she cannot express herself, and she starts yelling … we understand what she wants most of the time, but not all the time," Maya Zeiberg said. "We were thinking, and he was thinking, about the whole population of speech disabled people." 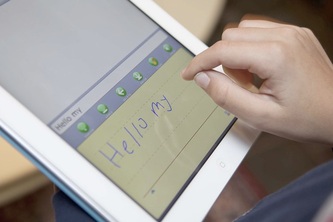 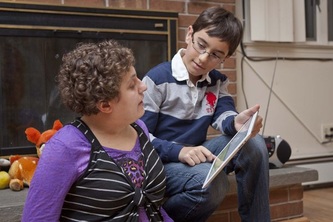 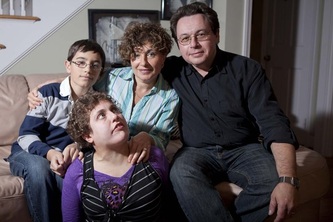 After the Thanksgiving conversation, Eric – who liked to "jailbreak" iPhones and build robots using Lego Mindstorm kits – began watching online tutorials to learn how to write code for iPad apps.

With a little help from his software developer dad, Boris, he first built a calculator called TalkingCal. The app uses text-to-speech software to read numbers aloud as the user types them in – something Eric hoped could be useful for the sight-impaired.

After TalkingCal became available in the app store, 2,500 people downloaded it for free.

Once he saw that his "test project" was a success, he spent his summer working on HandySpeech.

Eric combined two software development kits – starter kits for code writing – to develop the program. One was a handwriting-to-text program, the other was a text-to-speech app.

"There are lots of applications that do handwriting to text, text to speech," said Eric's dad, Boris Zeiberg. "If you search 'handwriting-to-text' in the Apple store, his is the only application that comes up."

The app recognizes print and cursive, and "learns" how to read patterns in a specific person's handwriting the more it's used. The user writes on the bottom half of the screen and presses a button when the text is ready to be played out loud.

The program can read in 13 languages in a male or female voice.

Users, including the Zeibergs' friend with muscular dystrophy, have sent "raving reviews," according to Boris Zeiberg.

At the beginning of December, the app had 30 downloads.

Eric said that for his Bar Mitzvah project, he hopes to donate some of the proceeds from the app to the Beth Israel Congregation's Spare Change charity project.

Overall, he has a simple goal: "I hope it will make [people's] lives better," he said.